I don’t have The Shopping Gene.

I would rather iron wrinkled cotton pleated skirts.

I would rather have a tooth pulled without drugs.

I would rather clean bathrooms then go shopping.

Considering I live with men who think “close” counts in other things beside horseshoes and grenades, two toddlers who LOVE unrolling and splashing, and a dog who thinks bathroom rugs are alive and must be stalked and then shaken bald for the safety of the family and good of all mankind, that’s saying a lot.

I know this is a character flaw because when I confessed to my Great-Aunt Alice she gasped, loud. Then she took my right hand in both of hers and said, “Marianne, you are not a Hebert.” Which in our family was akin to condemning someone to eternal damnation. In-laws in the Hebert family are “jokingly” referred to as out-laws, and we even made up tee-shirts that said so for the family reunion.

It didn’t escape my notice that this was only considered a female character flaw and not a male one. I can’t remember seeing my dad or one of my three brothers in a store. I’m pretty sure the words, “I’m going shopping.” have never been utter by any of them. None of them were told they weren’t Heberts.

My three sisters however are a different story. They love shopping. They plan shopping excursions with the cunning second only to Hannibal’s army scaling the Alps on the back of elephants and bringing home spoils of war. They expect me to admire their prowess at finding the last puce handbag at thirty percent off. They assure me that it will go with the sweater they scored last year. I try to be suitably admiring, but I just don’t get it. I have four handbags, a gold beaded job for wedding and things, a black one for winter, a white one for summer, and a red tote that the Alpha Smart will fit into for conference. I can’t imagine wanting a puce one, or using it either.

Occasionally they will invite me to go alone on their shopping safaris. It took me a while to realize that the occasions always coincided with Christmas and packed parking lots.

Not to brag or anything, but I excel at Competitive Parking. I honed my skills as an undergraduate, at a university where the administration sold a billion (more or less) parking passes for each and every marked parking space.

If some little blonde coed communication major, with a belly button ring, a red Mazda Miata, and a giant boyfriend to carry her one paperback text-book thought she was getting MY parking space when I had a thirty pound calculus book, a forty pound chemistry book and the entire works of Shakespeare and ten seconds to get to class –well all I can say is HA! I can still spot a car backing out of a space close to the front of a building eight point three miles away. I will get there first.

But once I parked the car for my sisters, I was quickly abandoned at the nearest Nordstrom’s with a cup of coffee, a thick paperback, and the instructions not to wander too close to the shoe section, because everyone knows buying shoes is NOT really shopping and my closet is sort of full. (Okay, so the sentence, “You can’t buy another pair of shoes unless you throw out a pair first.” has been spoken a time or two at my house. I just think the person saying that should fork over his closet as well because those three pairs of shoes and the flip-flops he owns are lonely.)

My sisters even buy their own gas. I can’t figure out why they don’t have gas fairies living at their houses, but they don’t. It’s sad. Gas fairies are pretty handy. When I need gas I just sort of casually mention it during dinner. Then the next morning “magic” my car has a full tank of gas. The gas fairy sometime grouses about the fact the tank was a third full when this conversation usually takes place. Excuse me, a third full is the same as saying two-thirds empty which means that tank is more empty than it is full.

None of my children inherited the shopping gene. My daughter, Erin, didn’t carry a handbag until she was twenty-five. She even pales at the mention of new shoes. She borrowed my car one time but immediately brought it back because it was making this weird pinging noise. The gas fairy had to explain it was the car signaling it need gas. (Who knew?)

But her daughter, Judy, who is only two years old, loves shopping.

Erin, Judy and I do video conferences a few times a week. When I ask Judy what she’s going to do that day, she always makes her eyes go wide and squeals, “Shopping.”

Then she runs around in circles clapping her hands.

Erin looks at Judy running in circles and says, “That is NOT my fault.”

But we know who to blame.

Judy got more than her big blue eyes from the gas fairy.

This site uses Akismet to reduce spam. Learn how your comment data is processed.

Once Around the Sun: Sweet, Funny, and Strange Tales for All Seasons 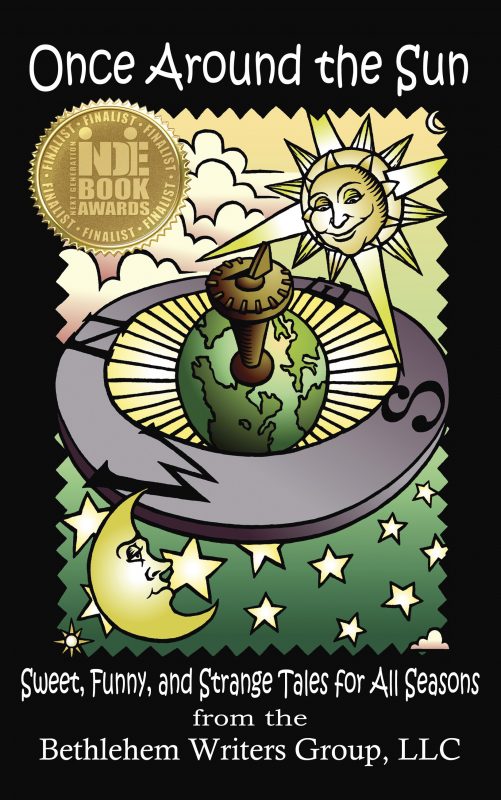 The multiple award-winning Bethlehem Writers Group, LLC, once again brings you stories that span a range of genres. Readers of mystery, romance, humor, paranormal, children's, literary, popular, and women's fiction will all find something to love. No matter your favorite season, you're sure to discover a tale to amuse and delight.